The Tiny Bits And Pieces 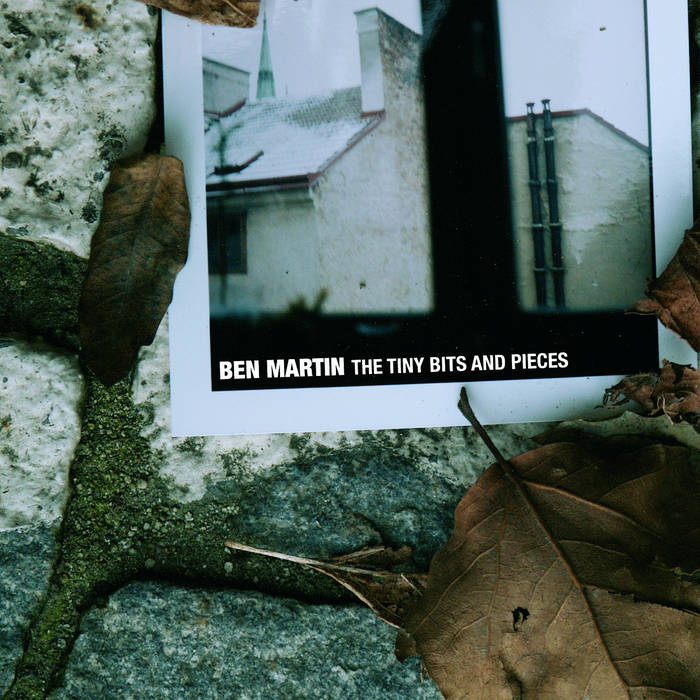 This album has a mostly light and optimistic feeling to it, which I obviously wasn't aware of back in late 2005, when journalist Robert Rotifer wrote this album info based on an interview:

„Singer/Songwriter as a genre is the biggest bullshit ever“ says Ben Martin. Sounds as if a lot has happened since the release of his debut album „That State Of Mind“ in 2004. While the mp3-only album „Travelling“, that filled the intervening gap, reached even deeper into the world of acoustic guitars and delicate sounds, „The Tiny Bits And Pieces“ presents Martin as the frontman of a bona fide rock band.

Martin seems to be able to move effortlessly between writing songs in the bedroom and blowing them up to a full rock line-up, so to him this transformation might seem less radical then to most admirers of his earlier work. After all, he had played the guitar in various bands before going solo. Martin and his congenial drummer Daniel go back thirteen years. They didn't even have to shave when they first played together. Nowadays, their band is completed by bassist May Köllner as well as Georg Tran (a.k.a. Landscape Izuma) on guitar, keyboards and backing vocals.

If it's Ben Martin’s aim to „prove to people that music doesn’t necessarily have to be soft and quiet just because the singer is also the songwriter“, then „The Tiny Bits And Pieces“ serves as a convincing case in point.

„Glory Days“, Bruce Springsteen once sang, „they just pass you by / in the wink of a young girl’s eye.“ „The glory days of rock’n’roll are gone“, concludes Ben Martin twenty years later, even though the euphoric opening song of his new album, driven by energetic piano chords, would suggest rather the opposite. Thanks in no small part to the help of co-producer/engineer Lelo Brossmann, these powerful sounds were not minted in some top-end recording studio, but rather on the top floor of Daniel’s parents' house, which he shares with his 95-year-old grandmother, as well as in Ben Martin’s small Viennese flat.

Noise was a problem, not in terms of angry neighbours though, but because of a building site right next door, which put out a constant, undesirable drone that set Martin’s and Brossmann’s nerves on egde. Maybe it was Martin's anger at the sound of a jackhammer bleeding onto a vocal track that added to the previously unheard venom in his singing.

„My route to rock’n’roll has been quite untypical and – I dare say – unique“, says Martin, who actually got a diploma as a jazz guitarist from a Viennese Conservatory. „I’ve always been lagging behind, I’ve always discovered bands later than everybody else. While everyone was listening to Nirvana, Guns’n’Roses or Extreme in the early Nineties, my heroes were J.J. Cale, The Blues Brothers, Pat Metheny, Jimi Hendrix, Eric Clapton (especially in Cream). And it went on the same way from there. I discovered Ryan Adams for myself while he had already been an old companion to many others. I found out about Billy Corgan when he was with Zwan. The list goes on forever.“

In his early childhood, Martin already got into Jazz, „but more into 70s ECM-Records than classic Swing Jazz. In this department, Gypsy-Swing Jazz was more formative for me. My CD collection is a mix of many different styles and artists, which don't go together by anybody else's standards.“ Only one piece is missing on Ben Martin’s record shelf: The very first LP by 8ts jive-popsters Matt Bianco with its many loveable inconsistencies and flaws, to which he compares his girlfriend in a catchy tune named after the band. „I’m mad about your little imperfections / Compare it to an old LP of Matt Bianco“, go the lyrics. „My Dad used to listen to the first album from Matt Bianco in our car over and over again when I was a child, which stuck in my memory. Some time ago I recalled the band and listened to it again after all these years, realizing how great it still is.“

The fact that his indie chums wouldn’t really share this notion only makes it better for Martin: „To call a song 'Badly Drawn Boy' would have been dull“, Martin argues, „I’ve always had the urge to do things that
deliberately move away from the fashionable consensus. Years ago this also used to show in the clothes I was wearing – you should have seen me in my younger days – and now it crops up in those kind of small details.“

„The Tiny Bits And Pieces“ therefore isn’t the soundtrack to the pursuit of the newest hottest shit, but a singing songwriter’s / songwriting singer’s intelligent rock album. The joyful enthusiasm of uptempo songs like „Let It All Begin“, „Cool To You“ or „The Heating Is On Again“ is highly infective, but the album also has its emotionally loaded moments, such as the beautifully arranged harmonies in „A Year“, the slide guitar and the backing vocals with a hint of Emmylou Harris in „I Am With You“ (hard to believe that Martin has never been to the US), or the two moving songs that close the album:

„In Time“ is the story of man who has all he wants but can't find satisfaction, it's „this ‚there got to be more’-feeling“, as Martin puts it. And then „I Wonder Why“, a true anecdote about an unexpected encounter by telephone with an old play-friend from his childhood: „I had been working at a phone hotline for a while when one day this guy called. I knew it was him right away. I was too insecure about him remembering me and wasn't sure if this was the right time and place to chat about the old times. After all, we'd only played football together. Thinking about it now, it was the right decision not to reveal myself. But at the time it bothered me.“

And so by the end of the album, the defiant clarion call of the opening track "The Glory Days of Rock'n'Roll" takes on a whole new, deeper, different kind of relevance. „We won’t ever make it / At least not make money / We won’t break the charts / Why not take a real job?“ For Ben Martin, there's just one possible answer: „We want to win back the glory of rock’n’roll“. Too right we do.

Ben Martin - Vocals, Guitars, Lap Steel Guitar, Piano, Keyboards, Glockenspiel, Bass, 2-Bar Cymbal on "I Am With You"
Georg Tran - Guitars on "Shoes" and "Cool To You", Backing Vocals on "The Heating Is On Again" And "Macon County"
Markus Köllner - Bass on "Listen To Me", "Shoes", "When Tires Collapse" and "The Heating Is On Again"
Daniel Letschka - All drums and percussions
Barbara Gruber - Backing Vocals on "I Am With You", "Macon County" and "Matt Bianco"

I'm here to write, perform and spread music that has its roots in pop with influences from soul, jazz and folk rock. Ever since I discovered the guitar as a means to express my feelings in 1985, I'm constantly refining and clearing the channel through which I receive, digest and send out music. I recorded "The Endless Stream Of Everything" to share my love and songs with you. ... more

Bandcamp Daily  your guide to the world of Bandcamp

outré black metal, with a Victory Over the Sun interview and music from Liturgy and Jute Gyte.